The top shelf of Big Mama is loaded with glazed odds and ends....and a few mugs I am refiring because the interiors weren't terrific.  An added benefit to working at ^04 is that it's possible to refire work successfully.  The only things I don't refire are plates, clocks....items that have a wide base sitting on the shelf.  The risk of cracking isn't worth it.
Toes crossed that all goes well.
Two cords of wood were delivered on Sunday....I always forget just how big the pile is.  Now the fun of stacking begins.  It's worth it because we stack close to the door....much more accessible and easy when the snow falls.  Although with El Nino we could end up with mostly rain.

I think today will be Clean the Studio Day!  When I start a new cycle I like to make a fresh start and it gives me thinking time......about clay.....and keeping the #*!! squirrels out of the feeders!
Posted by smartcat at 9:47 AM 6 comments:

Sunday morning in the sun room with plants, tea and Bach on the computer.  Definitely the best way to start the day.
It's the time of year for pies, although I must say it feels more like September than late November.  This is the tart I made for Thanksgiving.  It was delicious and easy to make.  Proge (son) did his turkey grill magic.  We cooked enough for many, but we freeze a lot for future easy meals.  One of my mottos appears to be,  'Anything worth doing, is worth doing to excess!'
The kiln is almost loaded just have to load the top shelf.  I have a blank ring at the top, which adds needed height when I do sculpture.  As long as I have at least one ring of elements in the top and put a shelf over the very top just below the rim it goes up to temperature very well.
This platter may be a disaster in waiting.  I had to do some repairs on the rim.  It should be okay, but who knows what whim the kiln gods will indulge in?

Happiness is a new battery in my MacBook.  I was completely crazed by my track pad going berserk.  I had visions of cat hair in the pad and having to take the thing apart....major overhaul.  Such was not the case; the battery was gone.  I got three and a half years out of it so I'm not complaining.  Not a cheap fix but a lot better than what I was envisioning!

Sometimes what appears to be disaster turns out to be serendipity.  I've been remaking the bowls/platters/birdbaths the cats broke.  I have never been happy with my rims, they were okay but sort of blah.  Somewhere I got the idea of trying to do more of a tube for the rim.  It may have come from looking at medieval head dresses or from watching Lord of the Rings again ( and yes, I admit it I am a complete Tolkien nerd......getting older means you care very little about who thinks you are a geek, nerd, weirdo.)  I use a bird bath for my form which gives me a sturdy support when I do the rim.  The knots are where I joined the clay.  I probably would have put them in anyway to break up the rim a little.  My hand built things never have the symmetry of thrown pieces, instead I push it a little further so it becomes intentional.

I started out calling these pasta or calamari bowls but they are a nice size for carving a smallish bird.  We put a twelve lb. turkey in one last year.

I may throw a few of one of my basic forms tomorrow.  I have one that I use for a honey pot, garlic holder, string holder what have you.  I like it when I can make one shape work in different ways.  I usually throw in groups of three, five something prime.  I find the odd numbers keep me a little on edge and more aware of what I am doing.

The yard clean up continues; we have wood coming this week end.  We are reasonably well organized for a change.

Raining again today.  It's supposed to get cold tonight, possible snow.  It starts getting dark too early.  I came in around 2:30, thought it was 4:00!

Most of the trees have dropped their leaves.  Some oaks will not drop until the end of winter; I wonder the why of that.  The beech trees are the last to drop their leaves.  I love the way the sun shines through and turns the light gold. Light in the woods changes from hour to hour.
It's hard to believe that we are going into mid November.  Since our bit of ice and snow and frost, we have had days ranging from low 50's to low 70's.  I want to take advantage of these late fall days; winter could start any day now. 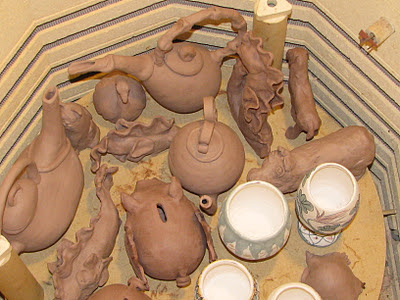 Kiln loading is continuing slowly but surely.  I had a small accident concerning cats sleeping in green platters.  Gee, if they're going to destroy my pots at least they could hang around log enough for me to take a few pictures.

I'll make two new ones and finish decorating some stuff I was going let go this firing.  One of the advantages of working at ^04 is that I can fire clay and bisque together.

Off to decorate and make goats, deer, and Lil' Sebastian.

Remembrance and thanks to all the veterans who have served the USA.

Happy week end to all.

I forgot to mention on yesterday's post:  There's a wonderful cup/mug show up at  http://claylink.com/zen/. There's lots of interesting stuff there....take a look.
Posted by smartcat at 9:52 AM 2 comments:

Looked out the window around 4:30 P.M. yesterday afternoon and found mother and babies having dinner.  One of the babies is behind his mother the other is out of frame eating the artemisia.  This is what happens when there is no dog at home.  It doesn't take them long to figure things out.
These guys are not in the least shy.  I took the photo at a distance of 25-35 ft. through the window.  Mom saw me, looked up could almost hear "Oh....it's you." and returned to grazing.  They wandered off a few minutes later.
So of course, I had to find a deer I had ready to glaze and do my own riff on a ruminant. 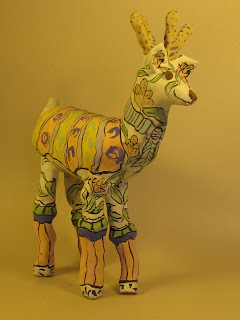 I have been doing a lot of clean-up in the yard.  I found this old bird feeder under a pile of junk.  It must be from the early 80's when I became pretty serious about clay, but before I began working exclusively in low fire. That is a ^6 clay and glaze and it has my old style of signing my name.  I did not use my usual design style until I pots I was able to look in the eye.

I think I may try a few of these.  As I recall they were pretty simple to build.  Originally there was a clay loop for hanging; that needs changing.  It will sit quite nicely on the deck rail this winter. 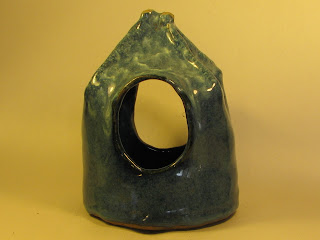