When everyone pitches in a little bit Funding a project becomes possible.

Michele and Jeff are moving and have a special cup offer to help.  Go to Gypsy Potters, their web page.  And of course, you can always look at their ETSY shop.

Lina Alvarez has the opportunity to open a studio in Los Angeles.  Good Dirt LA.  He Indegogo campaign ends this evening.  Again every little bit helps.

I off to NCECA in a few hours.  Hooray!!

I've been making shot glasses for our NCECA Clay Buddies Shot Glass Exchange.  This has been a terrific way to explore some new forms.   I remembered to take a picture before I put them in the kiln.  I find 'before and after' photos helpful.

The size makes them good for a used teabag, matches, cotton swabs in addition to holding whisky!

Happy First Day of Spring!  HAH!  We are expecting snow this afternoon!

Three years ago yesterday we went to Connecticut to look at some half corgis that had come up from a southern state.  The very nice woman said to another, "They have come to look at 'Stella'."  We took one look at a little white with one spot sitting in the back of a horse stall being jumped on by her rambunctious brothers and said, "No, we've come to take 'Stella' home."  She was such a timid little pup that she obviously needed a home that did not involve bullying brothers.

We decided That 'Stella'  was a no go.  Wandering around the woods, if she got off her run,  Yelling STELLA!  did not appeal at all.  We named her Winter, because she is white and we could have a good time calling her the littlest Dire Wolf and saying, "WINTER IS COMING!"   Obviously there has been entirely too much Game of Thrones in our lives.

This is the way Winter looked yesterday.  Notice that the snow by the slab has melted and daffodils are beginning to show. 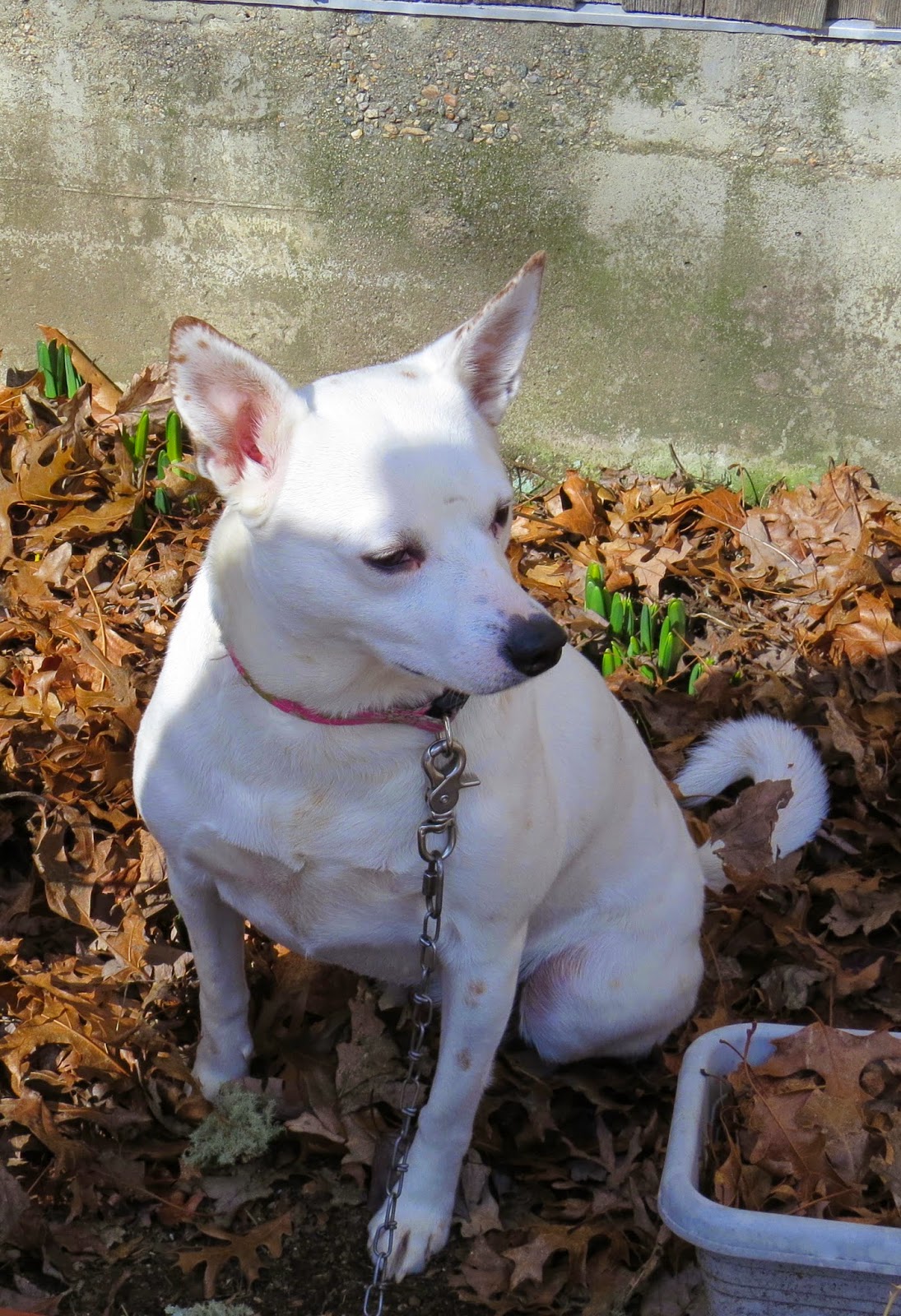 It's a far cry from the day we brought Winter home.  That was a particularly warm spring.  Of course we did have a drought later in the summer! I made banoffee pie for Pi Day.  It was delicious! 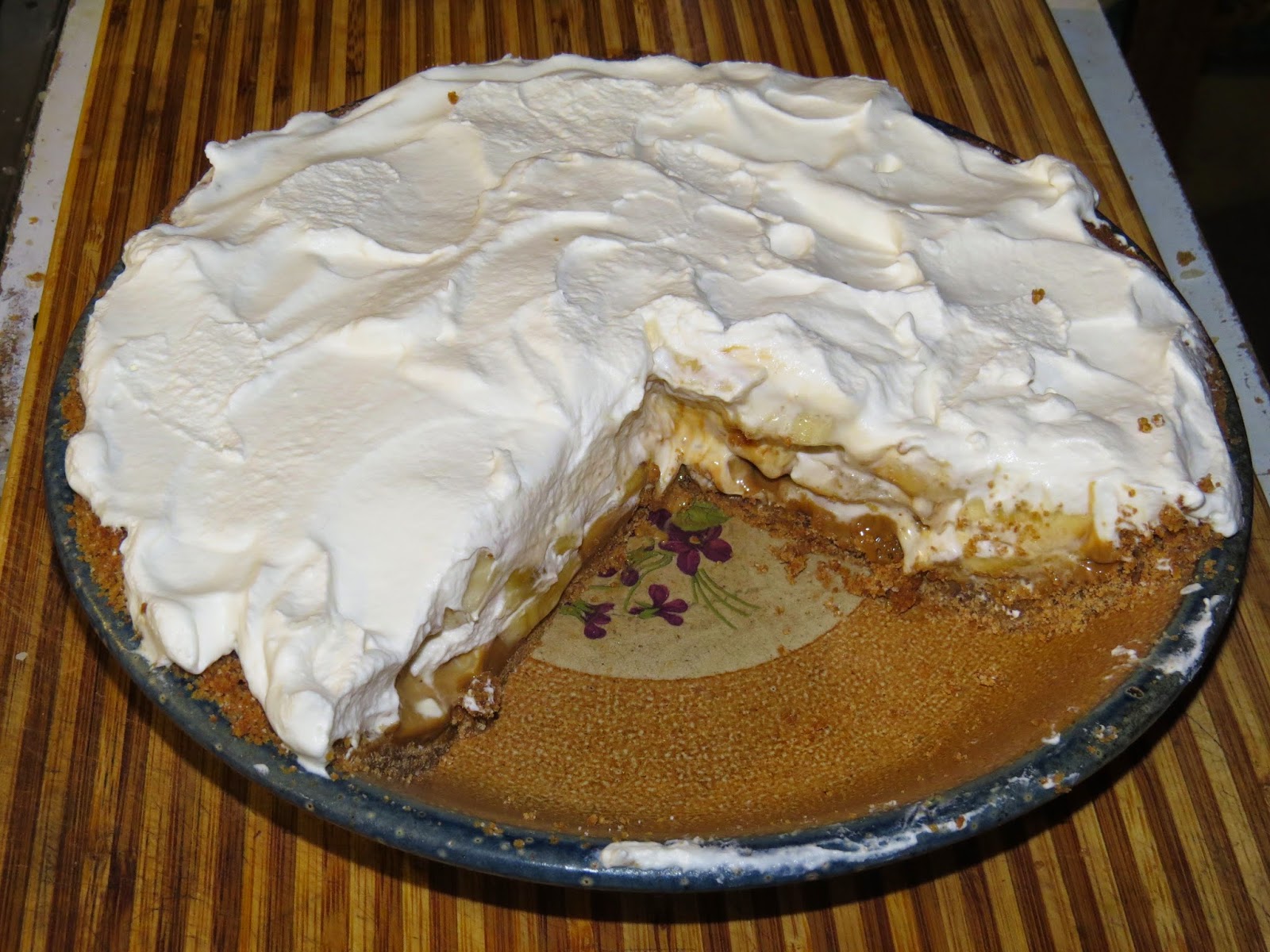 Yesterday we lost our electricity for several hours in the early evening.  We hooked up the inverter, got out the gas stove and continued life.  Every house should have a power inverter!

Today is sunny but very windy.  It's a good day for working indoors.  I am getting ready to fire the kiln Big Mama this weekend.

Here's to sunny days ahead!

This is a teapot (surprise!) surrounded by various shot glass experiments and Li'l Sebastion!  The teapot is one I made a few weeks ago and then sort of forgot about over several days when it was too cold to work in my studio.

Clay Buddies on Facebook is doing a shot glass exchange at NCECA, which happens in two weeks or so in Providence.  These are all handbuilt, but I am going to throw a bunch tomorrow.  They are so easy to make that I am doing far more than I need for the exchange.  They could easily hold a used teabag, safety pins or any little thing that tends to get lost.  They will also make neat little test pots.

I am not generally good a large groups of people but since this one is in my back yard, as it were, I am going to give it a try.  I'm driving up every day so I don't have to worry about the expense of a hotel room if I decide to opt out.

Li'l Sebastion is what I call all miniature horses after Parks and Recreation.  This little guy is being glazed in wrought iron and moon light.....the names of the glazes, but it does sound whimsical doesn't it? 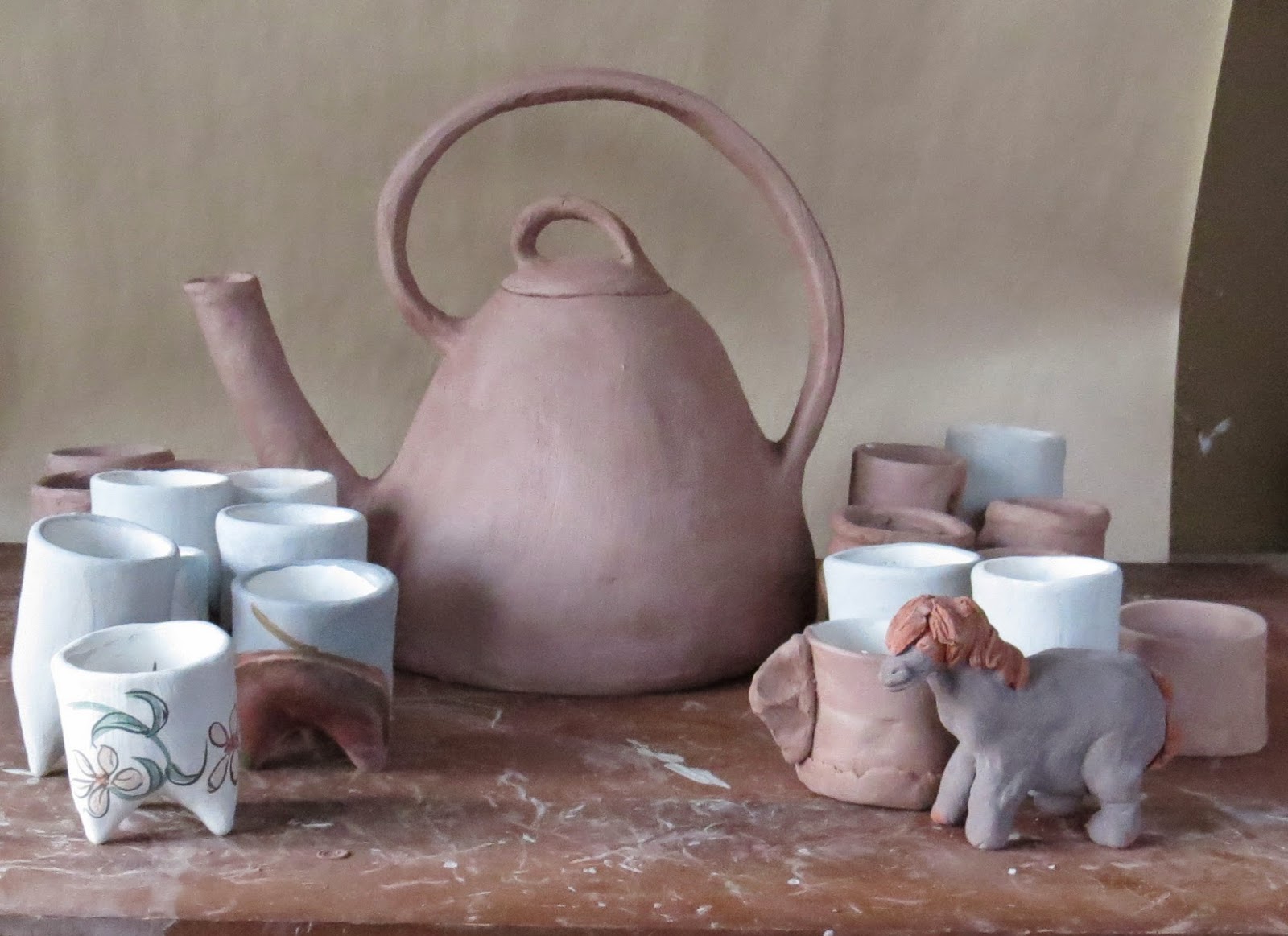 I lost the first week of March!  We had six inches of snow at the beginning of the week and then on Thursday another eight inches.  That's more than we have in an entire winter some years!

It's been in the high forties and fifties since Monday.  It's almost hard to believe after last week.  We've had doors open.  Last night Proge did his first dinner on the grill.

This was last Friday morning.  Picture card pretty, but cold!   The only good thing was that there was no wind so the snow on the trees stayed for a while! 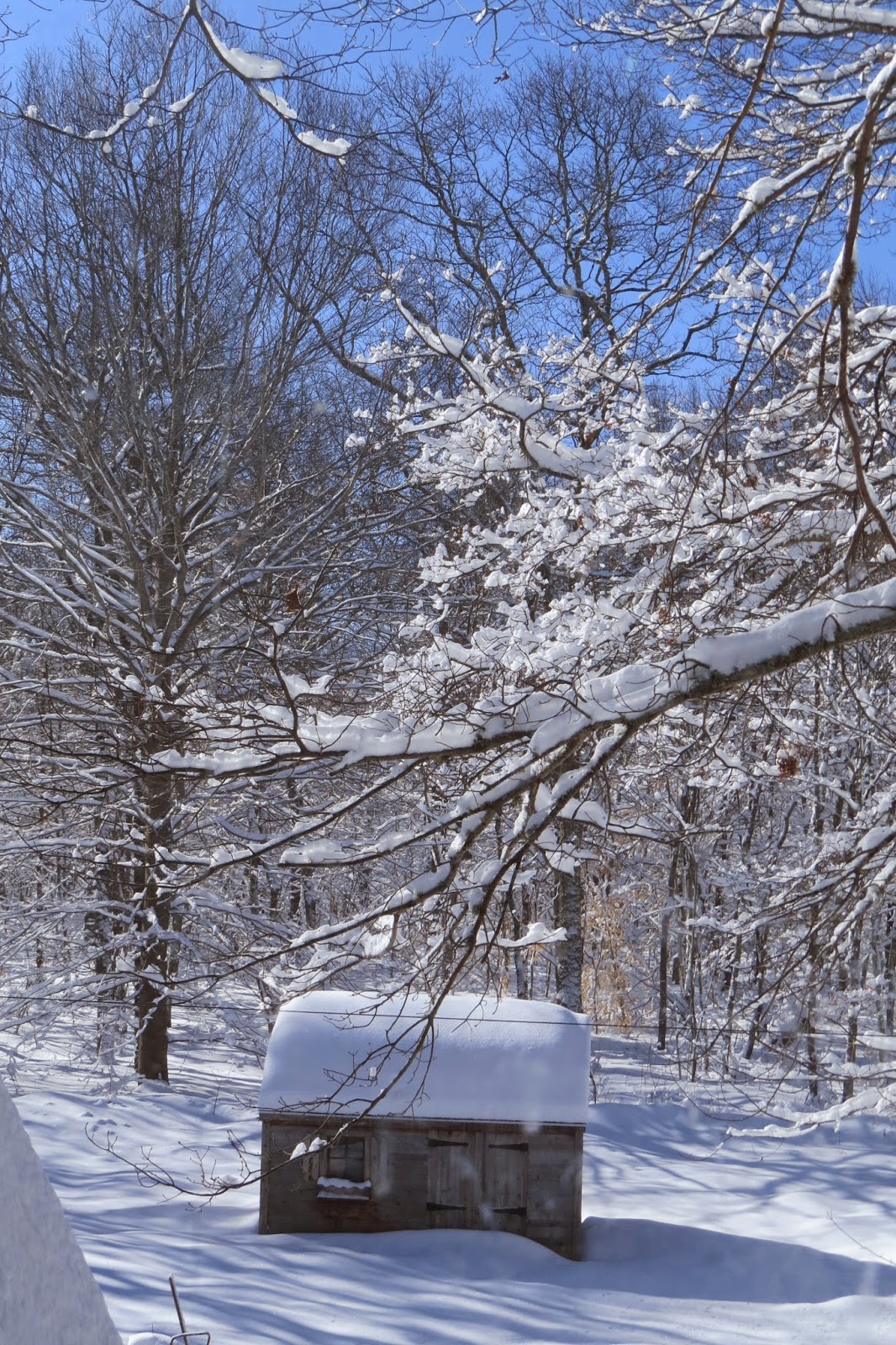 This is the same shot taken early yesterday morning.  It was forty plus.  The warm air and the cold snow made for a misty, woodland scene.   I'm reminded of North Of The Wall in Game Of Thrones!  If you look at the lower right those pink spots are the flamingoes poking up through the snow.  It's not groundhogs here; it's flamingoes that predict spring! 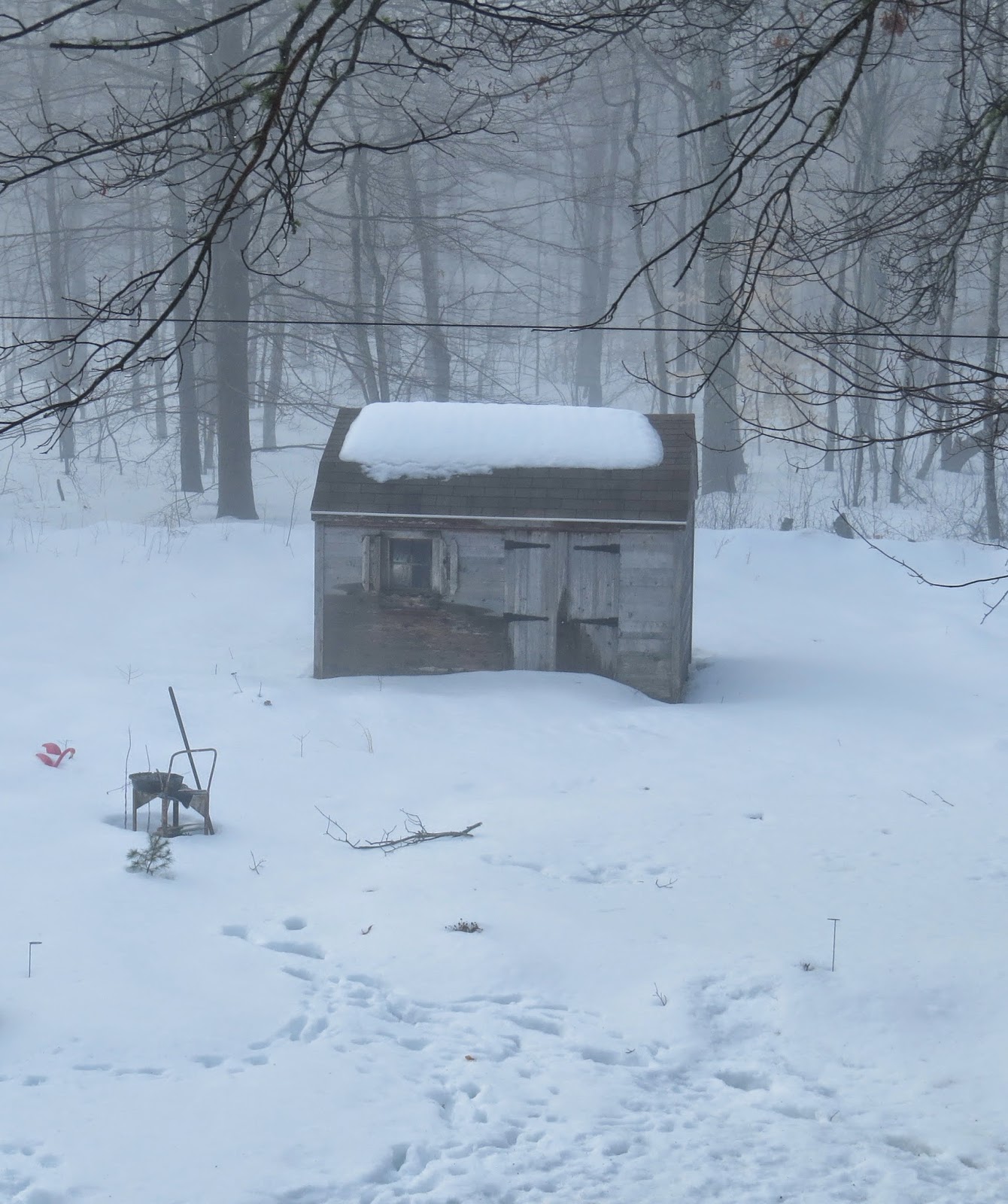 Toes crossed that we are through the worst of it.  Here's to sunny days ahead! 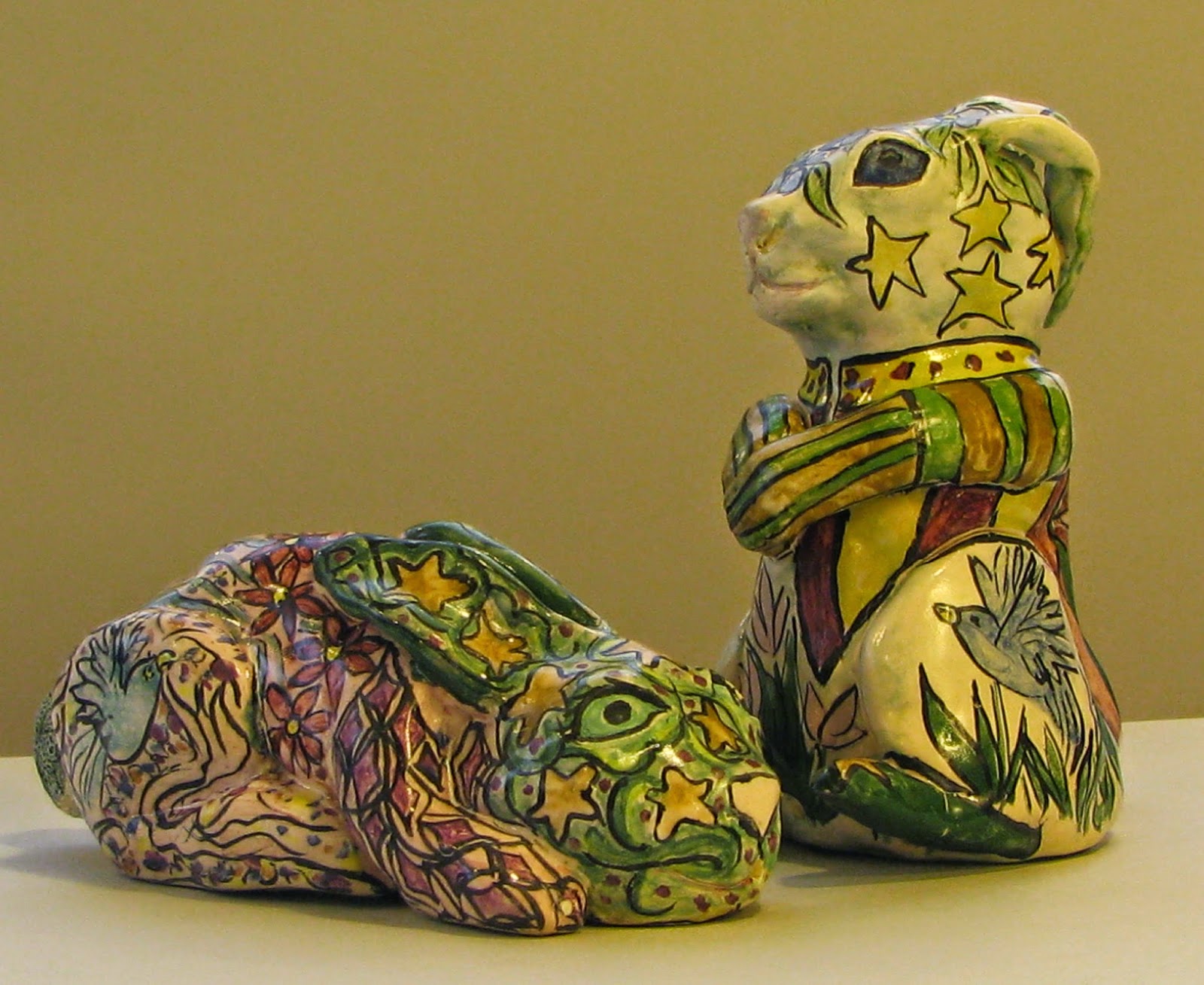 More snow is coming!  Aren't we supposed to be seeing signs of spring?  The sun is moving, or rather the earth is moving, so that the early sun hits to tree tops outside my southern windows.

Daylight Savings begins next Sunday!  Just when we were getting brighter earlier dawns!   At least it will be staying light late enough for us to start doing dinner outside on the grill.

Things are getting warmer.  It was 68 in my studio yesterday, without the heat going.  We blocked a small area off well enough that I have been able to use it all winter, barring a few extra cold days.  It's much nicer than having to move stuff upstairs!

I've been making shot  glasses or cups  for an exchange we are doing at NCECA.  It's practically in my back yard so I will be there.  Is anyone else going?

Enjoy the week ahead.