I have two sides of the house more or less finished.  I don't usually work in sections like this.  I prefer to consider the entire object, but this is so radically different on the other two sides it's almost like two different buildings.  I may make the remaining parts a little surreal, or go for a straightforward farmhouse.
I need to think about it. 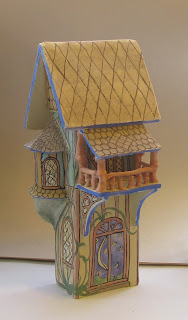 Never underestimate the power of clean laundry.  KikiLaSois and TheFriendlyKitty arrived about a year apart.  Friendly is friendly to humans not other kitties so this is a surprise.  Once last summer they curled up next to Breezy when she became geriatric, but mostly it's been kitty stink eyes.  Yesterday I brought up a basket of unfolded laundry.  These two curled up with each other within a half hour.  I wonder what will happen when I put the clothes away. 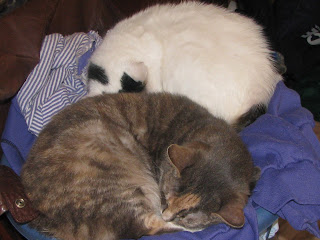 On our one warm day I started getting my real studio ready so I could throw a few things and generally  start preparing to move in.  Alas, it snowed and then got cold enough to make it uncomfortable to be there.

Temps have been in the thirties with wind.  If it gets over forty outside I am willing to use the heater for a few hours to get it into the low sixties......soon, grasshopper, soon.
Instead I glazed and decorated a turtle whistle.  I have found that while I can work on several turtles at once, it completely discombobulates me to try to work on say turtles and ladybugs.  Live and learn.
I think I'll make some bigger ones come summer.


I found this hibiscus flower in bloom in my sunroom yesterday.  They don't usually bloom inside this early.  It must be the warm winter and the lights I have rigged....it's hard to say.  Suffice it that there are flowers inside.  A project for this week is to rearrange the plant shelves so I can start some marigolds.  The little yellow ones grow quickly and are great for tucking into bare spaces in the garden....and I like the way they look mixed with curly parsley. 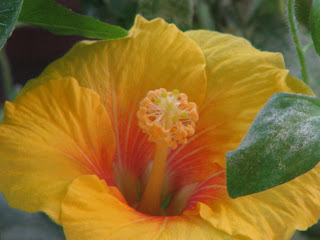 Happy Sunday.......is anybody going to watch the Oscars?  Yes, another sign of my nerdiness!

Yesterday it was sunny, with no wind and temps in the sixties.  This morning we woke up to this.  It's been such a warm winter that I never bothered to put the flamingos' hats and scarves on.  Yes, making little hats is something to do on winter nights! 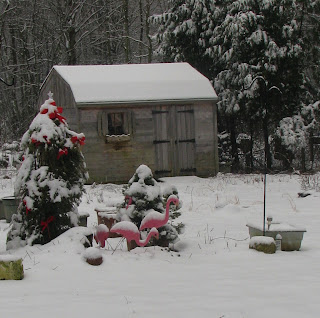 The daffodils are next to the south side of the house.  It's built on a slab and the flowers in this garden are always early but these will probably bloom on the next warm, sunny day.  Crazy weather! 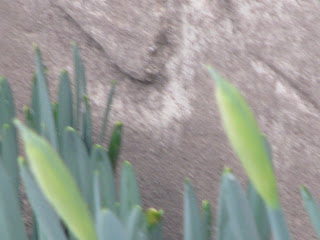 Meanwhile, Aloysius has taken to living among the plants. 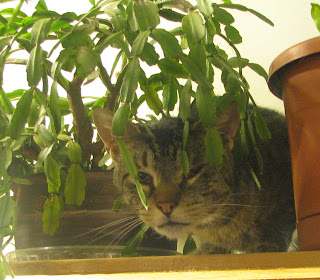 I started painting the house, a long slow process as I did not make it with the intention of glazing it.  If I ever do more of these I will paint a lot of the areas before adding others.   The nice thing about low fire is the options.  I could do a lot of work on the green piece, fire, add more color and/or clear glaze and refire with no ill effects.  I want this to feel like it has been built by non-professionals who want to brighten up their habitats.

This is, I assume, one of my original sketches, from about 2009, but the numbers I think are the date could be part of my way too cryptic notes to myself. 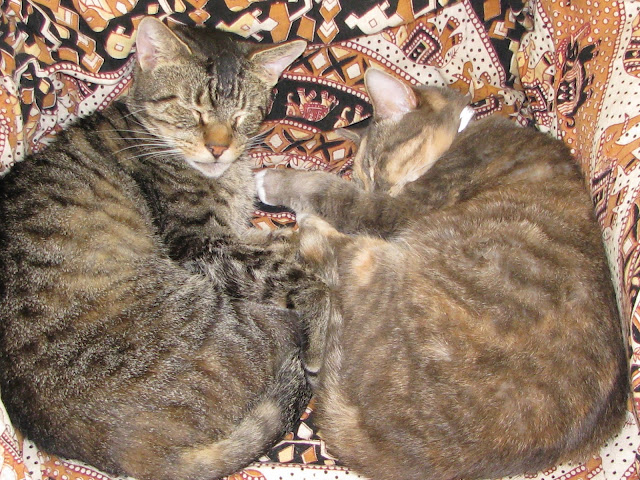 I have started decorating the whistles that I have ben making over the last year.  I enjoy doing it a lot, but I find that I can only work for  about two hours before I go mentally cross-eyed.  The ladybugs are between two and three inches long.  Decorating demands very fine brush work and wax to protect the decorated areas.  This is the first finished one.  I will have some better photos showing the bottoms and tops  as a group.....what is the correct name for a bunch of ladybugs? 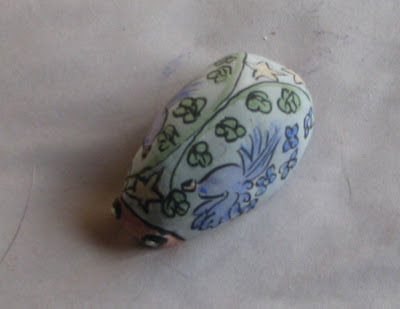 And now we come to bread.  My last attempt at Cuban Bread sort of didn't work out as well as I would have liked.  I"m fairly sure it's due two things.
1.  I used too much yeast.....a brand that has 5/16 oz. in the envelope instead of 1/4 oz.  ( I also stay away from rapid rise yeast.)
2.  I added olive oil...not bad in itself, but I should have either cut the water or added more flour.
Cuban Bread Recipe

WOW!
I just was nominated for/won the

Many, many thanks to Cat at Cat's Ceramics.   Click on the link to see all the neat stuff she does, especially her glazes.

This is one of the things I am enjoying about blogging.  There are connections made around the world.  Cat is in Sussex, England; I am in southern Rhode Island, USA....and am becoming part of a whole new (to me) world of potters and their work.

There are THREE THINGS I am supposed to do.

ONE:  Thank the award giver and link back to them.

TWO:  Nominate/award newly discovered bloggers.  I see others nominating anywhere from five to     fifteen.  Since I have only been doing this since September all blogs are new to me.  Here are five of my favorites.  My decisions were based on drawing names   I do have to leave some blogs for others.

THREE:  seven things few or nobody knows about you

1. My grandmother taught me to knit and crochet when I was seven.

3. I was an acting major my first round of college.

5. I love keeping up with the Volvo Ocean Race, but am terrified of blue water sailing

6.  The first time I did pottery was in 1966.  I did it for about three months, moved and always thought of it as a jog in my life until twenty years later, when I wondered why I ever stopped.

7.  I still have the very first pot I ever made.

There you have it....again thanks to Cat

Update:  Went over to theVBA site and found out a few things.

1. Yes, it is supposed to be fifteen, but you are also supposed to take your time and put in the blogs you want to get into the world...so I am going to post in groups of five.

2. You can download the VBA thingie at VBA....see above.

I've been working on these tiles to fix what is in danger of becoming a leak in the bottom edge of the shower.  I made the originals way too thin, so I have been using them to figure spacing and designs.  Since it's a shower I think I am going to go with the sea life theme.  Once these are fired we we will probably use them as coasters and hot pads.
I am also getting ready to make tiles for a wood stove surround.  I'm tired of looking at Wonderboard!  I'm going to make and fire all the tiles......then start designing.  I'm looking a lot a tile stoves and all. 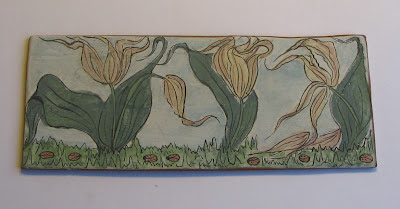 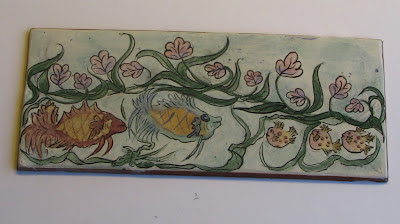 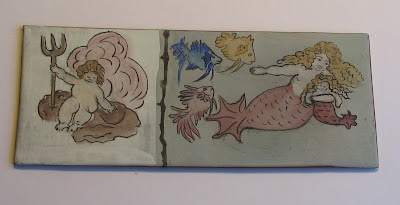 I saw a version of this many years ago.  It pretty well describes my life with the furballs!

I finished this yesterday.....another platter/pasta dish.  The pencil marks will burn out and it should have a clean, slightly off-white background.  Sometimes I get carried away with the number of colors I use and the pots become too busy.  With this one I limited myself to three colors,  poppy red, celeste green with a little orange for the poppy highlights, and of course black for the outline, but I don't consider black a color here....all Mason stains; the poppy and orange are zirconium encapsulated, so they are food safe.

Today has been all mundane studio stuff.....wedging clay.....sorting glazes and colors.....cleaning up my decorating area.  I am not big on cleaning except at my decorating table.  I have to be obsessively tidy there.  Contaminating stains gets expensive!

Sunny and in the 60's today.  The poor goldfish out in the fish pond are totally confused!  Supposed to get colder tomorrow......Groundhog Day!