I have finally been putting my fish out around the pond.  I sort of forgot about them, but now they are here and happy.  This blue guy is the first large one I made.  He started as a demo for a class I was giving and grew.

I enjoy making these, so when I have more clay I will indulge myself and make more! 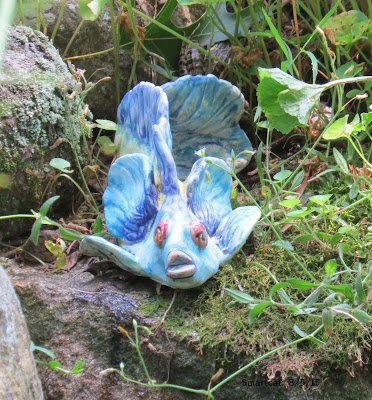 Which leads to an oh fer duh! moment.  I was all set to start making stuff when I discovered that no I did not have 100 lbs. of clay ready to go, but a lot of clay waiting to be recycled.

The photo below is a small portion of what I have been doing.  I like to get all my clay for the year ready during the summer so I can do it outside, thus avoiding at least one potential studio mess.  I beat it to a slurry with my glaze mixer and put it out to dry on screens.  This came inside as a rescue when it started raining.  Good thing I did too as we had over two inches of heavy rain. 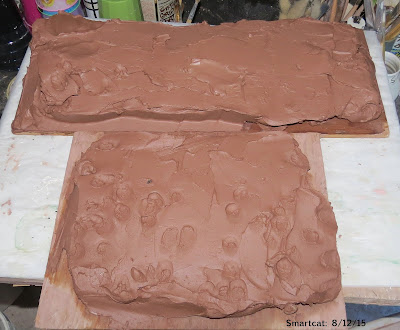 I did find a bit of my low fire white so started a couple of three-legged mugs.  I want them to look a little more tilted and funkier than they do.  A paddle will beat them into submission! 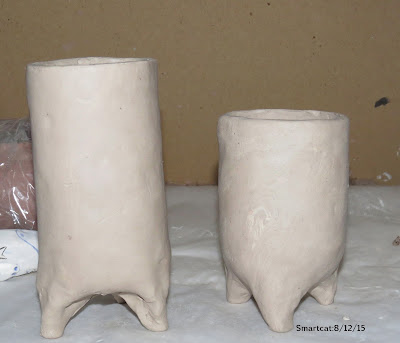 We were cutting down a lot of sassafras sprouts that have been invading since last year.  In the process I found my old garden rattles That I made in a workshop with Elsbeth Woody in Port Chester,  NY around 1987.

They are some of the last thing I did in high fire clay.  It was Elsbeth's clay body fired to about ^8 with a red iron oxide wash.  They have beads of clay in them so they rattle quite nicely when pushed around.

I never followed through but I always had an image of some sort of lawn game with undertones of croquet and bocce. 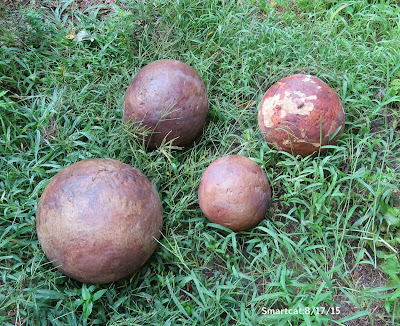 And last, two little frogs that are out by the pond.  We have quite a few of them this year.  I'm not sure why; some years we only have one or two.  There are at least two bullfrogs among them who enjoy announcing they are present in the middle of the night. 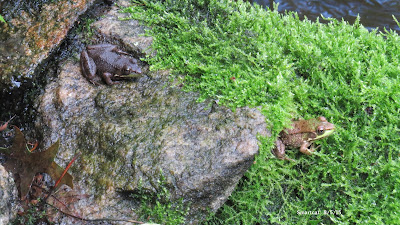 The person who extolled the silence of nature obviously never lived there!

Enjoy what is fast becoming a late summer!  Where did it go?

Are these the dog days of summer?  I must admit that  this is my favorite time of year.  Everything is growing and blooming.

My lilies have been spectacular this year.  I guess our long, snowy winter was good for the perennials.  Actually I think it's more likely due to the fact that fertilized like crazy last summer.

I love it when I get masses of flowers like the lilies.  These go from a pale pink to white and are so fragrant that they scent the whole yard. 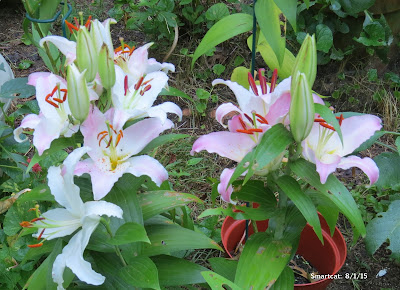 This alba is very special because it grew from bulblets that I did not know existed.  They were in another part of the garden where the original plant was.  The original died last year, so I was delighted with the new shoots.  I dug and potted them and will plant them when they finish blooming. 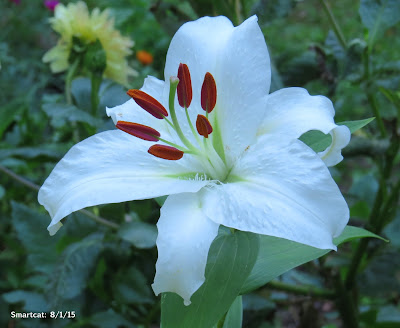 The day lily is a special one that I bought from Larry the pond guy the last summer he was open.  It bloomed beautifully in its pot, but last year had no flowers at all.  I am so pleased to see it blooming and in great shape. 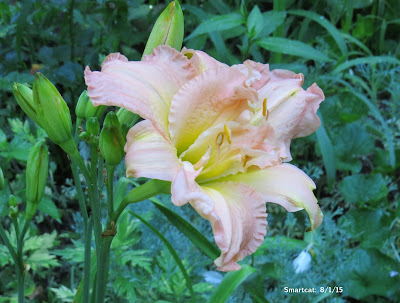 I haven't put flowers on my work for quite a while.  I'll start out by drawing these from life, but use the photos for reference.  Digital cameras are so great for getting immediate results.

I woke this morning to rain, thunder, and a lot of wind.  It was one of those downpours that feels like buckets of water are being dumped from the sky.  We got about an inch which is always welcome.  Wind gusts of 80 mph were recorded in our town.  Much of the state lost electricity.  For once we didn't.  That is extraordinary in itself.  At this time of year we keep the car well gassed so if we do lose power we can switch to the power inverter.

We are working on restoring the pool.  Removing the liner was not the hassle we thought it might be.