Happiness is my tea order from Upton Tea.  I ordered it Saturday.  It arrived Tuesday afternoon. 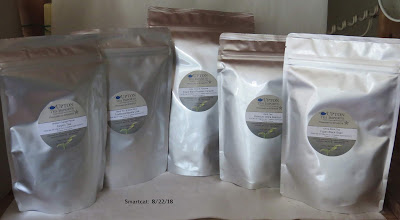 This should be enough for a couple of months.

We are in a period of clouds, rain, and sun.  The rain stopped and the sun is out so I will go outside while I can.

As always, thanks for stopping by..................*s*
Posted by smartcat at 10:35 AM 8 comments:
Email ThisBlogThis!Share to TwitterShare to FacebookShare to Pinterest
Labels: Upton Tea

This fellow showed up in a tree at dusk last night.  While I was taking pictures an Osprey started circling.  Winter barked and chased him away. 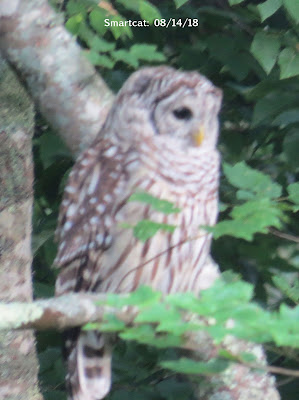 I think out fish pond is doomed!

Toes crossed that everyone is still enjoying summer.

As always, thanks for stopping by.............*s*
Posted by smartcat at 10:52 AM 8 comments:
Email ThisBlogThis!Share to TwitterShare to FacebookShare to Pinterest
Labels: owl

Then:  Ringo a bit less than a year ago shortly after we decided to keep him and Grayby along with LuckyPeach. It's hard to believe that he was small enough to fit in a flower pot. 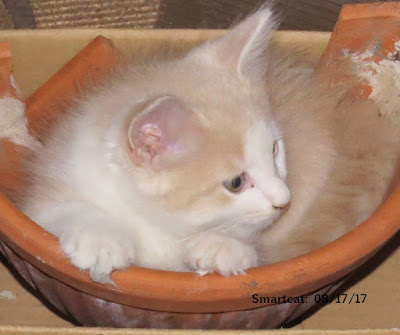 And here he is today, almost a year later.  He now weighs about fifteen pounds and is even fluffier than his pictures show.  This is about as dignified as he gets.

He is more likely to be lolling around on his back, even when he sleeps, waiting for tummy rubs. 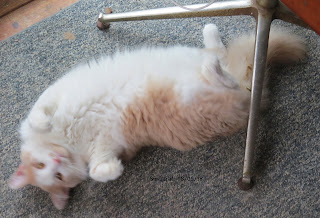 His full name has morphed into Sir Ringo the Magnificent.  He has been magnificent for most of his life,  The sir was added when Ringo Starr was knighted.

It's a good thing he enjoys being brushed and combed because it's a necessary part of his daily upkeep.

He and Grayby have discovered it's fun to attack my feet while I am sleeping.  I need a kevlar blanket!

We are having a weekend of rain which is not a bad thing.  It just means that outside work is curtailed.

As always, thanks for stopping by....................*s*
Posted by smartcat at 11:30 AM 10 comments:
Email ThisBlogThis!Share to TwitterShare to FacebookShare to Pinterest
Newer Posts Older Posts Home
Subscribe to: Posts (Atom)