And So It Goes.

We live in a ruralish area and don’t do a lot of going out in the world.
Prior to going into the hospital and before Crovid I was doing reasonably well, even though surgery was in the offing.
I fired Big Mama pretty successfully.  I was planning on cleaning and changing my studio a bit, which is something I like to do every spring.  I was even thinking about being able to do some selling at Christmas!
Now that I am home I am realizing that recovery is going to be a long, hopefully steady, process. I just have to take it on a day by day basis.
The most difficult thing has been to try to accept that I am almost seventy-seven and recent cancer surgery survivor.  I will make it a point to avoid people when I am able to drive. Others can do my errands; there is no need for me to go into places.
Doc follow-up appt tomorrow.........we’ll see, grasshopper......we’ll see.
As always, thanks for stopping by......*s*
Posted by smartcat at 12:40 PM 3 comments:

The kiln goddess was good.
I managed to finally fire my kiln before going into the hospital.  (More about that later.) 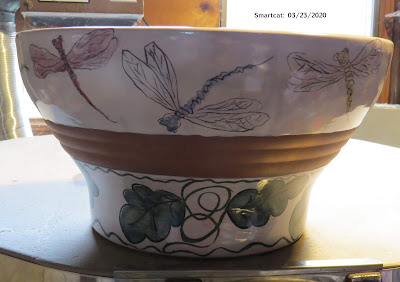 I have had many conversations about glazing and firing purchased terra cotta pots.  Here is proof that it can be done.
However, there are caveats:  1. Pots from Italy seem to be more successful.  Examine them carefully for hairline cracks. I spray mist to bring out any hidden problems.   2. I have used studio glazes
successfully, but there is a greater chance of crawling and bubbling so I am sticking with Spectrum
Majolica White #799.
This will be great outside over the summer but I will put it in a safe dry place before there is any chance of frost.

Now for the not so fun part.  I may get fairly graphic so if talk of bowels and such turns you off stop reading.
:
:
:
:
In late January I saw my primary care doc for my annual checkup.  She did not like the looks of hemorrhoids so recommended I see my gastroenterologist ASAP.  A week and a half later I was having a colonoscopy (which I was due for anyway).  Hemorrhoids taken care of but discovered a one and a half centimeter polyp which she removed and biopsied.  Came back cancerous, so within three weeksI was scheduled for upper bowel surgery. Went into the hospital March 24, had surgery, was well enough  to come home yesterday, Friday.

I seem to be recovering well.  But I am still trying to get used to thinking of myself as ‘at risk’. I guess at 76 and cancer survivor those are the breaks.  Staying away from people out here in the woods and enjoying early spring.

The good news is that a CT Scan showed no others problems.

Stay well and safe.  Get that colonoscopy; the prep is worse than the procedure.

I have been looking at the original Goonie Birds (shown below on my New Year’s Day Post) and thinking about how I could come up with variations.

These first efforts came from the pinch chickens and ducks that I make.  Obviously they need a lot of work with wing, feet, etc., but they are a beginning. 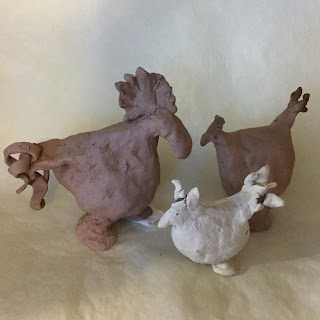 Old Christmas is past,
Twelfth tide is the last,
And we bid you adieu.
Great health in the new. 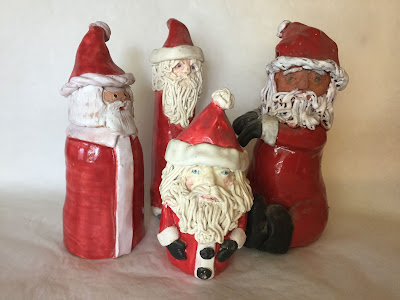 Wishing everyone a Happy Twelfth Night.