I've been looking at this teapot that I made last fall.  I am experimenting with thrown, altered forms.   The handle needs work.  I like the shape and the arc, but viewed head on it looks weak.  When I pick it up, it doesn't feel right for the pot.  It isn't going to break, but I would be happier with a broader, visually stronger handle. 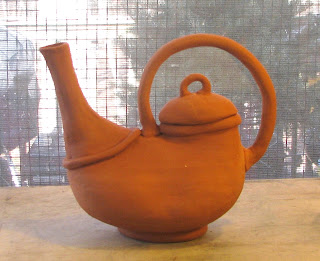 When I alter forms I aim for asymmetry.  I wish I had whacked it a bit more.  I would like the left side to be rounder.  It works better in the front view.  The right side should be higher and plumper.  I generally do prototypes in groups of three.  This was a bowl I was not happy with so I started fooling around with altering it.  Sometimes my best ideas come from the end of the day, what am I going to do with this, nothing to lose space I get into.  Sometimes things just fall apart. 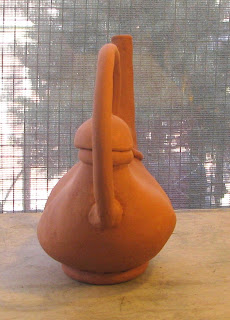 Late spring has returned to early spring.  It was down in the 20's last night and I lit a fire in the wood stove this morning.  It's quite windy so I think it's going to be an indoor day.

One of my passion flower vines has started blooming and the jasmine is coming into bud.....so it feel springy in the sun room.

In a week or so I am going to try starting moonflowers and heavenly blue morning glories.  Last year spring was so cold and wet that my seedlings never had a chance.  Sometimes the magic works; sometimes it doesn't. 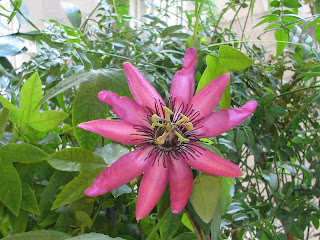 Winter is getting along quite happily with two of out three cats.  That's KikiLaSois in the middle and The Friendly Kitty on the right.  We have to keep an aye on this arrangement as the cats are fully capable of pushing Winter out of her bed and taking it over for themselves.  She was bold enough this morning to sit on Friendly when Friendly wouldn't get out of the way.

I have generally had big to huge dogs, so to have a sort of cat sized dog is a new, fun experience. 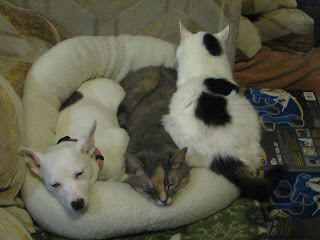 Email ThisBlogThis!Share to TwitterShare to FacebookShare to Pinterest
Labels: teapot/Winter

I don’t allow anonymous postings, but otherwise talk to me. I love to hear from you.